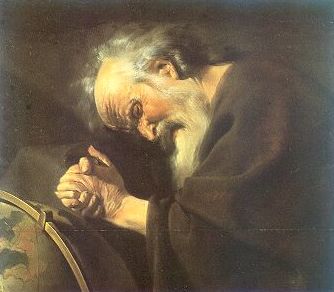 I have long had an interest in philosophers of the dialectic. This blog is a expression of that continued interest. Heraclitus is an interesting case given his status, as Hegel sees it, as the first objective dialectical philosopher, but also given his influence on writers throughout the history of philosophy into the contemporary period. Hegel and Heidegger are just two of the significant contemporary philosophers to have been strongly influenced by him.

In this blog I am commenting on the Fragments of Heraclitus not simply to explicate what Heraclitus thought (though those who read all of these will get my emerging understanding of that) but also to consider, with him, issues that he found important. So I will evaluate on the basis of his texts issues like what “sound judgment” consists in, questions of how internal experience and reflections are related to our external happenings, questions of the continued value of dialectic thought. I will reflect to some extent on how later Ancients and Medievals received his thought, as I explore those issues, and I plan to summarize or comment on the reception of his thought by both Hegel and Heidegger. What I offer here is not philology so much as philosophical reflection that does still attempt to honor the text.

One of the first questions confronted in this project is what translation of the fragments to use; another is the order in which they should be presented. I have decided that I will mix various translations, making others available where it seems particularly helpful to do so. I began my comments using the order in Robin Waterfield’s translation in The First Philosophers, The Presocratics and the Sophists (Oxford U P, 2009). However, he only translates about half of the Fragments, so I in the end re-numbered the early comments in alignment with Kahn’s numbering in The Art and Thought of Heraclitus (Cambridge UP, 1983) and decided to continue comments following the order laid out in that translation. Kahn reconstructs the Fragments to align with the general thematic order that we know from Diogenes Laertius was employed in the Ancient and now lost book of which the Fragments were a part, Heraclitus’ On Nature. That was divided into three sections: on the universe; on politics (and ethics); and on theology. The more specific order of those fragments within that book is not known.

In addition to following Kahn’s numbering, I do indicate the fragment numbering from various other translations, including the critical edition numbering of Diels/Kranz (DK, normally in the revised B sectioning), the latter which are also followed by Dennis Sweet (S), whose Heraclitus. Translation and Analysis (U P of America, 1995) I often make use of. I also provide the numberings of Philip Wheelwright ( W) in The Presocratics (Odyssey Press, 1966), and the recent translation by Andre Laks and Gleen W. Most (GM), available from Loeb Classical Library, Part 2, on Early Ionian Thinkers (Harvard U P, 2016). In the blog, each of those texts, including Kahn’s, is referenced with the first letter of the last name of the translator (as noted above).

This is a work in progress. Early entries will be updated and changed as I find and correct missteps and rework the ways in which I want to present this material. I welcome comments! If the blog encourages some to muse on the value of Heraclitus and examine the erudite scholarship of those who have done the above translations and commentaries or to read Eva Brann’s Heraclitian inspired The Logos of Heraclitus or other relevant work exploring this thinker or questions of the dialectic, then all the better.